Catalyzing innovation and adding more transparency to government through the release of open data is an issue that should rise about partisan politics. At least, that was the message that Nigel Shadbolt, an advisor to the United Kingdom, delivered at a conference in Bilbao, Spain yesterday.

Shadbolt’s presentation on how they did data.gov.uk, the British open government data website will offer some fuel to the arguments of advocates in other countries or states working to justify standing up similar repositories – or defend one that are already online. In his presentation, below, Shadbolt offers up a range of arguments, including more accountability, citizen engagement, improvement to public services, government efficiency, benefits to economic and social value, and that “government as a platform” idea that continues to maintain traction around the globe.

It was only last month, after all, that the United States Congress weighed deep cuts to funding for federal open government data platforms, with the final budget slashing the White House Office of Management and Budget’s e-government fund by some 75%. As data.gov relaunches as a cloud-based platform, the arguments for open data that Shadbolt advances will need to be born out with favorable outcomes in at least a few areas over the coming year to shore up bipartisan its continued operations. The brightest hope for those outcomes is likely to come from health.data.gov, a subdomain of the main open government data repository, where the U.S. Department of Health and Services has been working to making health data as weather data.

For more on the United Kingdom’s open government initiative and the open data movement, watch Shadbolt’s talk from February 2011 of this year, embedded below: 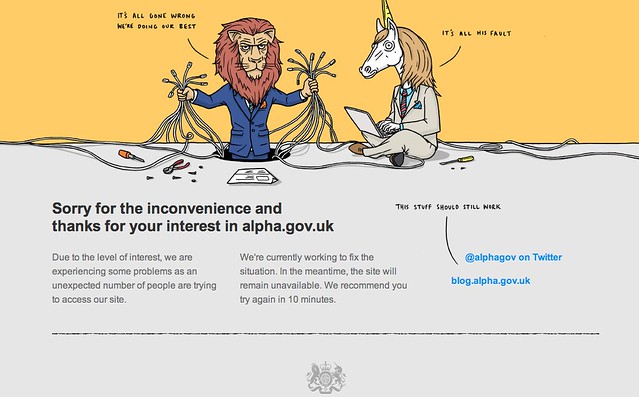 Alpha.gov.uk is an experimental prototype of a new, single website for government in the United Kingdom that the Government Digital Service developed over the course of three months, working from the recommendations of Martha Lane-Fox’s Review. That service is located within the UK Cabinet Office. As its designers emphasize, “the site is a demonstration, and whilst it’s public it’s not permanent and is not replacing any other website.” (The hilarious 404 graphic above was designed by Matt Blease.)

There are some interesting semantics to consider here. In software development, “alpha” refers to the initial release in a software development cycle. In machine learning, alpha is “the degree to which a learning agent takes into account new information.”

In either sense, a government seeking alpha in rebooting its online presence is both taking risks and revisiting what government websites should do in the 21st century. The trial of Alpha.gov.uk offers a toolkit of simple, reusable functions that are oriented around the most common needs that citizens go online to address, like lost passports.

To date, the British plan to reinvent websites has received good press, including an excellent post what Alpha.gov gets right. One notable choice in age of austere budgets: going with an open source platform and using next generation web development tools and languages, including a mix of Ruby and Python. Says Wired UK:

This isn’t the first time that the government has experimented with creating a single site for all departments. From URL directories to public service hubs, sites like direct.gov.uk have often tried to shove the whole shebang into one, hulking site with varying degrees of success.

But Alpha.gov.uk’s daring design, 21st century architecture and expansive ambitions (the content can be easily syndicated to new internet platforms, like apps or IPTV),  could be the way forward.

The Alpha.gov team continues to share more about how Alpha.gov was developed at the project blog, encouraging citizens to play with the prototype and send feedback to Get Satisfaction or to @AlphaGov on Twitter or Facebook.