It’s a tale of two parties, two social networks, live events and high stakes: creating jobs in an American economy still struggling to come out of recession. Would the American Jobs Act, introduced by President Obama earlier this month, make a difference? Can the White House or Congress do anything to create jobs, aside from directly hiring more government workers for infrastructure projects or similar initiatives? The American people will have the opportunity to hear from both sides of the aisle today and judge themselves, starting at 2 PM EST when the president will participate in a town hall hosted at LinkedIn in California.

Notably, there will still be a live chat on Facebook at a LinkedIn townhall, along with a public “backchannel” at the #meetopportunity hashtag on Twitter.

This is the second time that the White House experiments with LinkedIn for questions, following a forum earlier this year with tech CEOs and federal CTO Aneesh Chopra. The questions are pulled from a “putting America back to work forum on LinkedIn.com. As I’ve observed before, the platform isn’t ideal for ideation and moderation of questions but LinkedIn is unquestionably targeted towards employment.

Personally, I’d like to see CEO Jeff Weiner crunch the big data the social network has collected about job openings and the skills and degrees that high school and college grads currently have. Programs and policies oriented towards matching the two would be an interesting direction.

UPDATE: Here are the questions that were asked:

UPDATE: Below is a “storified” tweetstream from the event:

At 6 PM EST, the leaders of the Republican caucus in the U.S. House of Representatives will also host an online townhall, though they’ll be doing it on Facebook Live. The event will feature House Majority Leader Eric Cantor of Virginia, Majority Whip Kevin McCarthy of California and Budget Committee Chairman Paul Ryan of Wisconsin. Facebook COO Sheryl Sandberg will moderate.

Prior to today’s event, the House GOP leaders participated in a discussion about the role social media and technology now plays in government with Politico’s senior White House correspondent, Mike Allen. Video is below:

In the interview, the House GOP’s “Young Guns” spoke at length about the role that new social and mobile technology plays in the work of Congress and government, touching upon many subjects that will be of interest to the open government community.

Such interest is hardly new — the new GOP majority came into the House with promises to embrace innovation and transparency— but given the importance of open government, it’s a useful reminder that open government is a bipartisan issue.

If you have thoughts or comments on either of the town halls or the discussion above, please share them in the comments.

UPDATE: The archived video of this congressional “Facehall” is embedded below:

UPDATE: A Storify of my own tweets during the event is embedded below:

In coordinated tweets with Twitter, the White House announced that it will be holding a town hall on Twitter on July 6th, 2011 at 2 ET. Twitter launched a new @TownHall account for the event and a subdomain, AskObama.Twitter.com to host the live webcast.

According to Macon Phillips, director of digital for the White House, and Sean Garrett, Twitter’s vice president of communications, the digital town hall will be hosted by Twitter co-founder Jack Dorsey, who will provide the questions.

Phillips tweeted that “@Twitter has a cool approach to surfacing questions,” clarifying that “choosing the Q’s will be done by @twitter. Garrett tweeted that “there will be a fairly involved process by which they are selected” and more details and background on said process is on the way. UPDATE: Garrett emailed me “the basics”

“There will be multiple ways that questions will get to the President,” he wrote. “Twitter users will begin asking questions via the #AskObama hashtag today. To identify popular and relevant questions, Twitter is engaging with a third-party Twitter measurement company called Mass Relevance to provide a view on the most frequent topics and their geographical distribution. Additionally, Twitter will invite a group of highly active and engaged Twitter users (called “curators”) to help choose questions and comments both prior to and during the event. Twitter will collect questions in the days leading up to the Town Hall and in real-time during the event.”

Garrett also added some information regarding how Twitter will select this team of “question curators”:

The Twitter TownHall follows a Facebook TownHall earlier this year, in which Facebook founder Mark Zuckerberg posed live questions to President Obama. Nancy Scola wondered how much of a “TownHall” the event actually offered. With this Twitter version, the interesting detail will be in how much transparency goes into question selection, particularly with respect to how exact or tough they are. When the White House turned to Twitter to discuss President Obama’s Middle East speech, they included NPR’s Andy Carvin and Foreign Policy’s Mark Lynch as trusted interlocutors. It’s less clear how Dorsey will moderate, given his considerable different style of tweeting, but on one count there is no doubt: this will be interesting.

UPDATE: In his post on President Obama taking questions on Twitter, Nick Clark Judd raises similar questions over at techPresident on moderation. (And no, he didn’t call the event a “TownHall.”)

UPDATE II: The New York Times published more details on the “Twitter Town Hall,” including the news that there will be a “White House Tweetup,” the first of its kind. In terms of process, here’s what Twitter told the Times. (Spoiler: it’s quite similar to what Garrett told me, above).

Twitter will select the questions, using curation tools and a group of Twitter users to help identify the most popular questions raised both before and during the event. Twitter will be relying on its own search and curation features as well as a company called Mass Relevance to help find questions and topics that are most frequently mentioned.

… Adam Sharp, Twitter’s manager of government and political partnerships, said that the curators chosen by Twitter to help select the questions would be a politically and geographically diverse group. He said the curators would ask the people in their communities to highlight what they think are the most important questions for the president to address.

Curators will also be retweeting questions and posting their own.

“We will have highly-engaged Twitter users from around the country to provide that geographic diversity to help identify good questions, “ he said. “This helps us make sure that we are addressing the concerns that the Twitter universe cares about. “

Less clear whether the President of the United States will actually be doing any of the tweeting himself, as opposed to dictating a reply, which means we may not get to see any real-time presidential typos. According to reports by Paul Boutin, President Obama started tweeting for himself at @BarackObama over the Father’s Day Weekend, signing the tweet “-BO.”

CBS News White House correspondent and keeper of presidential lore Mark Knoller cautioned, however, that “Obama won’t be typing his responses.” Looking back at that Father’s Day tweet, Knoller tweeted that “a tweet was sent in his name by his campaign. He was not at a computer typing a tweet.”

We’ll see if the President decides to get more personally involved or not in the technology. Given that the presidential iPad appears to travel with him these days, it could happen. 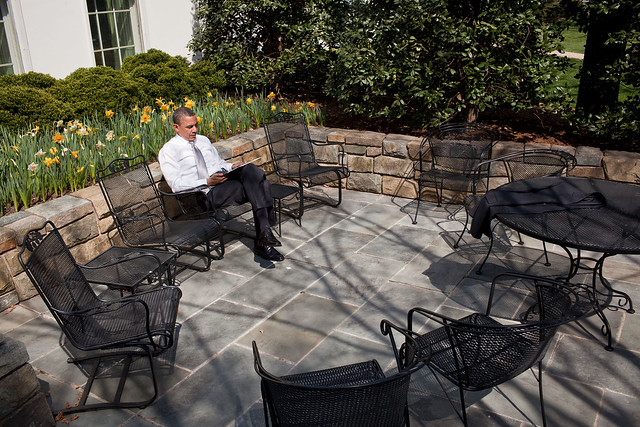 The audience for tomorrow’s hour-long TWITTER TOWN HALL in the East Room (2 p.m. ET) will consist of 140 characters — er, people – in a nod to the maximum length of a tweet. President Obama, however, will face no such limit: He’ll answer questions for the audience, and @TownHall will carry summaries of what he says. Twitter co-founder and Executive Chairman Jack Dorsey will ask the questions. Three screens will be behind Obama and Dorsey: one with the current question; another will have a heat map of the U.S., showing where the town-hall tweets are concentrated; and the third will show the volume of tweets, by topic (jobs, taxes, spending, health care, etc.) Mass Relevance, a company that has worked with the broadcast networks on real-time Twitter data, will supply the analytics. Later, Radian6 will study the demographics of participants.

Representative questions will be chosen partly on how often they’re retweeted. The White House has also reached out to about 10 Twitter leaders in different parts of the country to help surface questions by curating themes and topics that are big among their followers and in their communities. So Dorsey may say: “We’re hearing a lot about the extension of unemployment benefits, especially from the upper Midwest, and here’s a question from Bob in Chicago.” The audience will include 20 people from around the country chosen through the White House Tweetups page, and they’ll also get to meet with Dorsey and with U.S. Chief Technology Officer Aneesh Chopra and perhaps other policy officials.

UPDATE IV: Twitter has blogged about the “Twitter Town Hall,” including a link to the 7 “curators” on Twitter who are selecting questions and a new study from Radian6 that found that “financial security is one of the most frequent topics of political conversation on Twitter.”

Tomorrow’s Town Hall is an invitation from the White House for anyone on Twitter to participate in an open exchange about the national and global economic issues facing the United States.

Questions addressed during the Town Hall will be selected both in advance and in real-time during the event. To narrow down the list of popular, relevant questions to ask on behalf of Twitter users, we’re doing the following:

• We’ve partnered with the visualization experts at Mass Relevance to identify the themes and regions driving the conversation.
• Algorithms behind Twitter search will identify the Tweets that are most engaged with via Retweets, Favorites and Replies.
• A team of seasoned Twitter users with experience discussing the economy will help flag questions from their communities through retweets.