The 2012-2013 influenza season has been a bad one, with flu reaching epidemic levels in the United States.

“…armed with low-cost phones and an Internet connection, people are using civic-minded apps like ForageCity to tackle everything from public safety to potholes. The question is whether the technology will have the long-term effect that some foresee, or whether the “commons 2.0” and “participatory urbanism” will become empty marketing slogans.”

-Angela Woodall, writing in the Oakland Tribune about a new mobile application from Oakland’s Youth Radio that is designed to help people redistribute extra fruit and vegetables to people in need.

Woodal asks good questions and, as it happens, posed them to me last week in a phone interview. (I’m quoted in the article.)

Here’s a couple of thoughts that didn’t make it in. Mobile applications that civic developers are creating around the world — like ForageCity — are making it increasingly possible for more people to interact more easily and for less cost where ever and whenever they wish. That does lead to giving more power to more people to connect to one another and solve problems, or at least discuss them.

The potential for such apps to connect and, crucially, scale is particularly significant when there is a shared standard for the open government data that fuels, as with the standard for transit data (GTFS) that now exists in 450 different cities. Around the U.S., cities are slowly working with one another to define more such standards — but it’s a complicated process that doesn’t happen overnight, or even years.

The question is whether the technology will have the long-term effect that Code for America founder Jen Pahlka described to Woodall. On that count, I tend to give Pahlka — and my publisher, Tim O’Reilly — the benefit of the doubt.

As I said to the reporter, the potential for civic apps is enormous — but these the tools are only as good as the people who use them and adapt them. The tools can be quite good on their own — full stop — but many network effects will only take place with broad, mainstream adoption.

Smartphones can now be used for finding shelter, improving medical care and documenting riots — but the same devices are also used for gaming, pornography, celebrity gossip and shopping. While the apps used to find city services are generally not the ones used to surveil citizens, in practice the mobile device itself may be an agent of both actions.

Working out how to both protect the rights of citizens and empower citizens using mobile devices will be a difficult and crucial need in the years ahead.

It’s not immediately clear, at least to this observer, that state governments, Congress, regulators and law enforcement are up to the challenge, but it’s hard not to hope that they rise to the challenge.

Across the country, geeks are using mountains of data that city officials are dumping on the Web to create everything from smartphone tree identifiers and street sweeper alarms to neighborhood crime notifiers and apps that sound the alarm when customers enter a restaurant that got low marks on a recent inspection. The emergence of city apps comes as a result of the rise of the open data movement in U.S. cities, or what advocates like to call Government 2.0.”

The AP covered Gov 2.0 and the open government data movement in February, when they looked at how cities were crowdsourcing ideas from citizens, or “citizensourcing.”

It’s great to see what’s happening around the country get more mainstream attention. More awareness of what’s possible and available could lead to more use of the applications and thereby interest and demand for civic data. For instance, on the @AP’s Twitter feed, an editor asked more than 634 “Hundreds of new apps use public data from cities to improve services. Have you tried any?”

Wohlson captures the paradigm behind Gov 2.0 well at the end of his article:

“New York, San Francisco and other cities are now working together to develop data standards that will make it possible for apps to interact with data from any city. The idea, advocates of open data say, is to transform government from a centralized provider of services into a platform on which citizens can build their own tools to make government work better.

Open311 and GTFS are data standards of this sort. What lies ahead for Gov 2.0 in 2012 has the potential to improve civic life in any number of interesting ways. I look forward to sharing that journey. 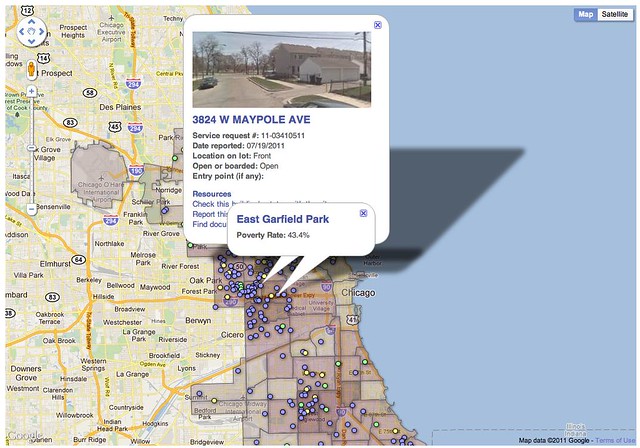