So this one time, at Transparency Camp…

I’m still thinking through all of the things I learned at the Sunlight Foundation’s annual unconference last weekend. My top level takeaway was the large number of international campers solidified that transparency has gone global. At an operational level, I thought that the Sunlight Foundation used the combination of Internet and mobile technology to organize better than any of the previous unconferences I’ve attended. They raised the bar for interactivity with a new mobile app, integrated displays and livestreaming. 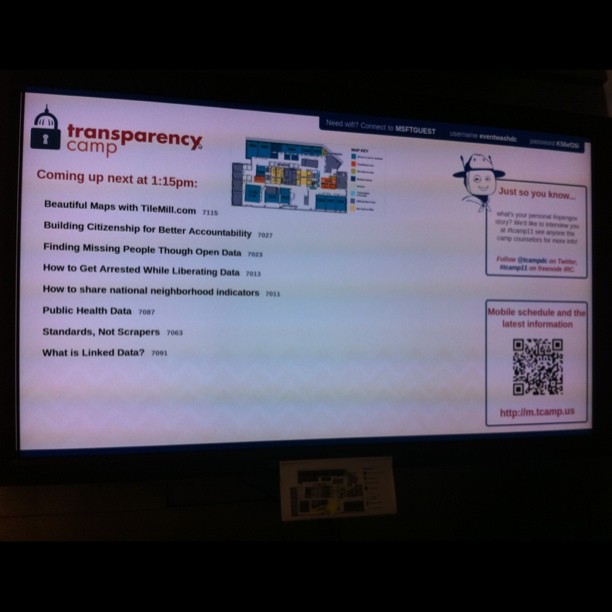 Putting the tools together to bring off a big camp is a lot harder than listing them, but by sharing the tools for transparency that the organizers used, Scott Stadum did the open government community a mitzvah. While that mobile app required development time and expertise, the vast majority of these tools are free on the Web.

Here’s a quick rundown of the tools that were used during Transparency Camp 2011:

Stadum did forget one tool, even as he used it: the Sunlight Foundation’s blog.

From where I sit, a well designed and maintained blog continues to be extremely useful as the hub for organizing, particularly in a Web application ecosystem that supports the kind of diversity in platforms listed above. Sunlight does a great job with that, and in using it as a platform to track news that matter, like open government data.

Thanks again to the organizers, sponsors, hosts and, most of all, the attendees of Transparency Camp, who taught me a lot about open government over the course of two days.